There is a lot of magic going on in a modern cockpit. Some of that magic isn't very modern at all, especially the good, old fashioned altimeter.

What you see for airspeed and altitude may come through a series of computers and be displayed digitally. But when you get right down to it, these measurements still rely on a basic pitot-static system.

1 — Evolution of the Modern Altimeter

3 — What do all those numbers really mean?

"Evolution of the Modern Altimeter"

Evolution of the Modern Altimeter

Probably the first suggestion that atmospheric pressure decreased with altitude came from Isaac Beeckman (1588-1637), but this had to await the invention of the mercury barometer by Torricelli about 1644 before being verified by Pascal in 1648. The altitude of free balloons was measured by portable mercury barometers some time after 1783.

Although the aneroid barometer had been invented by Zaiken in 1758, it did not reach a practical form until improved by Bourdon, in about 1845, from which time it was used both in free balloons and dirigibles.

Air is comprised mostly of nitrogen (78%), with some oxygen (21%), and a bunch of other gases. It can also have water vapor which displaces all that other stuff. The important takeaway here is that air is made of stuff and stuff weighs more than zero. All that air on top of you is pushing you down. More than that, it is pushing you all around. As you climb in altitude, even if just by foot when climbing up a mountain, there is less stuff on top of you, so less pressure. 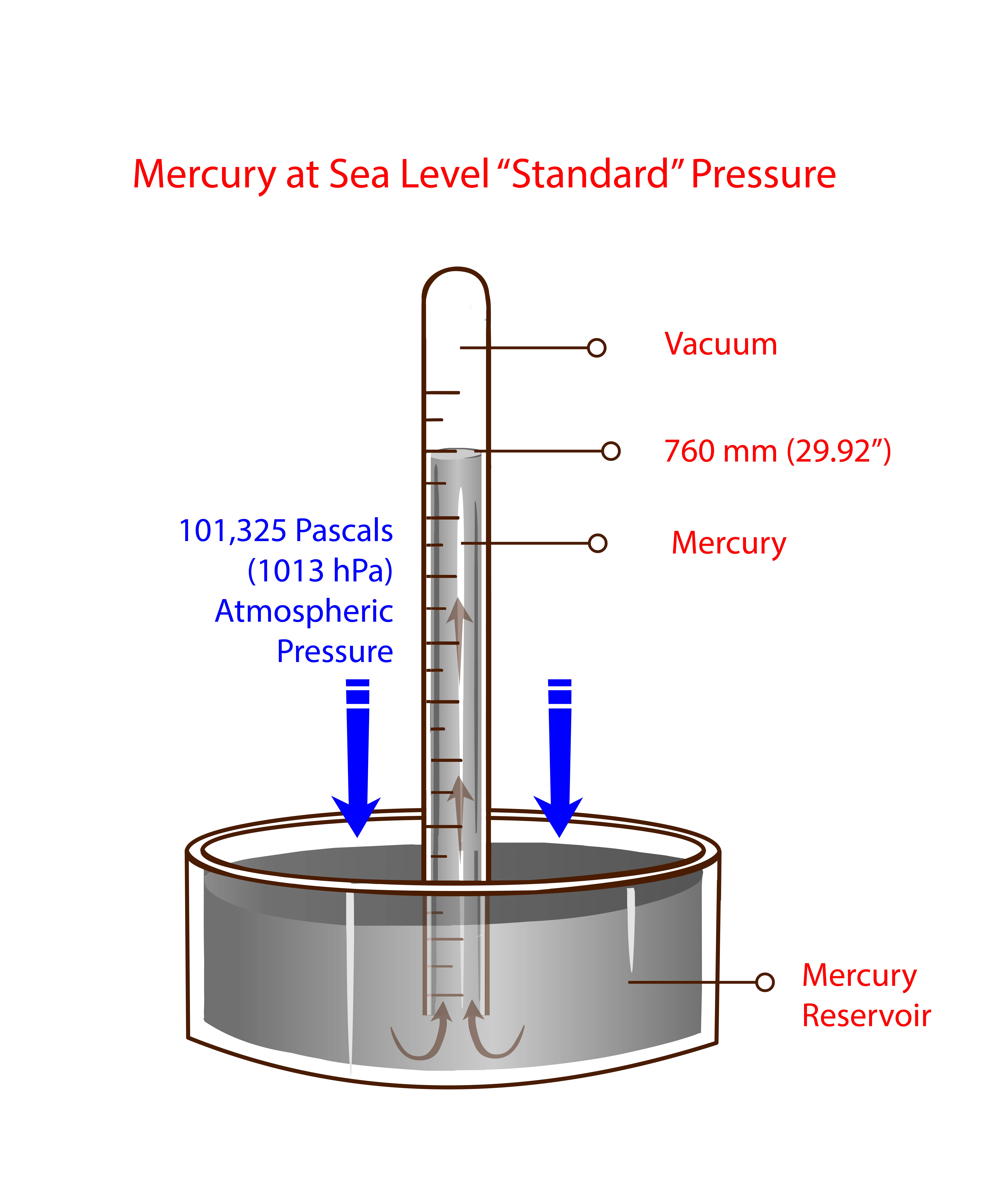 A basic mercury barometer,
(Shutterstock with my edits)

You can measure just how much pressure is being exerted on you with a mercury barometer. You take a sealed glass tube with a vacuum at the top and a pool of mercury in a dish at the bottom. The mercury wants to slip out of the tube but the pressure of the air on the dish keeps it from doing so. If you measure the column of mercury you get a representation of how much pressure is being exerted.

The International Organization for Standardization (ISO) has agreed on what constitutes a standard sea level pressure, it is 101,325 Pascals, so named after Blaise Pascal who verified much of this science in the 17th Century. In aviation, we use hectopascals (hPa), where 1 hPA = 100 Pascals. So a standard atmospheric pressure is 1013.25 hPa. Meteorologists measure air pressure in millibars, and 1 millibar = 1 hPa.

If you are wondering what this means in scientific terms: 1 Pascal = 1 newton per square meter. The more interesting question is what does this mean for altimetry?

With a standard atmosphere (1013.25 hPa) pushing down on our mercury reservoir, the tube of mercury will go up 760 millimeters (mm) which equates to 29.92 inches.

More about this: Properties of the Atmosphere.

Thus, a practical altimeter existed long before the Wright Brothers' first flight in 1903, but it is curious that no well authenticated record exists of altimeters being carried in aeroplanes before about 1913.

The mechanism of early altimeters was essentially similar to that of present day household barometers, which themselves have changed little since Bouron's day.

The pointer made one revolution over the full range, which varied from 0 - 7,000 ft in 1914 and 0 - 20,000 ft in about 1920. By 1945 the range requirements were 0 - 30,000 ft; the pointer then performed one and a half revolutions, being read against an inner scale for altitudes in excess of 17,000 ft. Rotatable scales were introduced at that time — so that the scale-zero could be aligned with the pointer before takeoff.

Though this altimeter performed fairly well under static conditions, it was of little use in the critical landing phase because of the change of indication with altitude, inertial forces, hysteresis and because the indicated altitude depended on the height above sea level of the landing field relative to the takeoff field and the differences in barometric pressure between them. 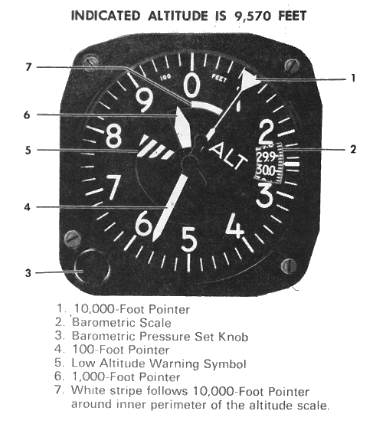 From 1928 onwards flying in bad weather began to be attacked scientifically, and the altimeter was developed to become a useful landing instrument. Apart from improvement in accuracy at low altitudes the mechanism was fitted with automatic temperature compensation and static balance to eliminate attitude and inertial effects. In the mid-thirties when radio links were established a baro-set adjustment was provided to allow the datum to be changed. Landing requirements also started the trend to pointer indications of 1,000 ft per revolution, necessitating two or even three pointers. The culmination of this development was the three-pointer sensitive altimeter, with a range of 0 - 35,000 ft, introduced in 1935.

This is what we had in the mighty T-37. It worked fine but you had to be careful with reading the correct pointer.

It was technically superseded by the servo altimeter in 1958 although it still survives in large numbers. Its inadequacy for high-altitude jet flight points to its decline for all but light or low performance aircraft.

The principle of the servo altimeter, introduced by Smiths Industries in 1958, was that aneroid capsules were relieved of all but the lightest mechanical work involved in the electrical detection of their position. The operation of the instrument was performed by an electrically powered servo. This resulted in significant gains in accuracy, the possibility of extension of the range to 100,000 ft, and the use of five-digit counter presentation making misreading virtually impossible.

How does it work? 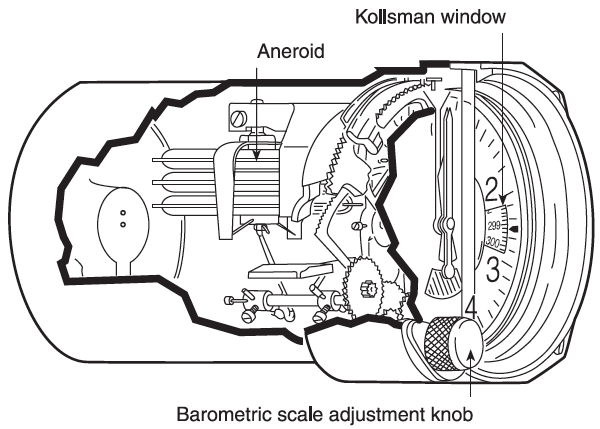 The sensitive element in a sensitive altimeter is a stack of evacuated, corrugated bronze aneroid capsules like those shown in figure 3-3. The air pressure acting on these aneroids tries to compress them against their natural springiness, which tries to expand them. The result is that their thickness changes as the air pressure changes. Stacking several aneroids increases the dimension change as the pressure varies over the usable range of the instrument.

Have you ever wondered why a bag of potato chips is filled with air? Well chances are the "air" is nitrogen to keep them fresh and the bag appears to be mostly plump to keep the chips from being crushed when the bag is handled. The nitrogen is under a little pressure so the bag stays inflated. But I digress . . . Take that bag of chips with you on a flight and notice that as you climb the cabin altitude also climbs. As that happens the cabin pressure decreases. But even as the pressure around the bag decreases the pressure inside the bag stays the same. That means the bag appears to get even plumper. So what does this have to do with altimeters?

The aneroid inside the altimeter is composed of a stack of sealed chambers, just like that bag of chips. As the pressure around the aneroid decreases, the aneroid itself expands, moving the gears and levers that eventually move the needle on your altimeter. Flying a glass cockpit? Well it is the same principle, but the gears and levers are connected to electronic gizmos that feed the computers with the same information.

What do all those numbers really mean?

We've seen earlier, that 29.92 means that the atmospheric pressure pushes down enough to force a column of mercury 29.92 inches against a vacuum. But what does that really mean? Early balloonists took just such an apparatus up aloft and found that the higher they went, the less high the column of mercury went. So we've come up with a way of measuring altitude: the higher you go, the less high the mercury goes. In time, we've come up with this:

We've all made a 0.10 mistake when setting our altimeter and thought very little about it. Let's say you are shooting an ILS to a sea level airport in the weather and set 29.82 when the actual setting was 29.92. Your altimeter will read 200 feet when you get to your decision altitude but the aircraft will actually be 100 feet lower. Okay, that is pretty serious. So watch out.

But now let's say you are flying an approach to Paris-Charles de Gaulle airport (CDG) to LNAV/VNAV minimums to Runway 27R. The controller says, "QNH 1 0 1 1, cleared full RNP approach 27 Right," and you repeat the QNH and the clearance. On frequency, you would have heard the controller give the two aircraft following you QNH 1001. You continue the approach until your altimeter reads 802 feet, which is the decision altitude of 752 feet plus the airline's 50 foot additive for LNAV/VNAV approaches. You don't have any visual references, so you execute a go around.

No problem, right? Because of the incorrect altimeter setting you were actually 280 feet lower than you thought. The 752 foot DA is 360 feet above the runway.

That is exactly what happened to an Airbus A320 crew on May 23, 2022. Their lowest recorded radio altimeter height was 6 feet above the ground. How could this happen? The controller twice gave the wrong altimeter setting to this crew. The controller gave the wrong setting to another crew, who read back the correct setting. The controller forgot to turn on the approach lights. The crew continued to fly with the incorrect altimeter setting on the second approach, but made visual contact with the runway and were able to land uneventfully.