We practice missed approaches to the point they are automatic and our muscle memory probably does make it automatic: power, pitch, flaps, gear. After that reflexive move, we look at how well the airplane is climbing and accelerating. And then we look at navigation. And that almost always works for a missed approach initiated at decision altitude where the engines are still spooled up and we are 100 or 200 feet in the air. The crew of his Canadair Regional Jet found out that things change when you get lower to the ground and especially once the engines are retarded to idle. When that happens, the automatic response can bite you.

The accident report is quite good and among other things, offers the first definition of a "balked landing" that I've seen from an official source. It is basically the termination of the approach after the decision to land has been made. Where it gets particularly dicey is when that happens after the engines are at idle. There are two key takeaways. First, engine spool up time could make it impossible to accelerate if you pitch up into your Takeoff / Go-Around flight director cues. You need to keep the airplane flying before you attempt to climb. Second, your aircraft stalls at a lower angle of attack (and lower airspeed) if you are in ground effect.

Many CL-65 pilots stated that on final approach the CL-65 is in a nose-low attitude because of its fairly high approach speed. It is recognized that the combination of low pitch attitude, high approach speed, darkness, and low visibility may result in a sensation that the aircraft is approaching the ground too fast, which would result in a tendency to raise the nose and to round out the aircraft earlier than required. This tendency is particularly pronounced when first transitioning to the CL-65 both from slower, more conventional aircraft and from larger aircraft with a higher pilot eye-reference point. In addition, because the engines are above the C of G, there is a tendency for the CL-65 aircraft to pitch up when thrust is reduced. These illusions and aerodynamic tendencies have been recognized and are discussed during pilot training. Both the captain and the first officer were aware of these characteristics.

Note that the PF pulled the throttles to idle at 80 feet.

Appendix C is a plot of three curves (coefficient of lift versus AOA) for the last eight seconds of the flight. The solid line represents the expected CL–alpha curve based on certification flight test data in free air and at an entry rate of less than one knot/sec. The dotted line depicts the CL-alpha curve computed by Bombardier for the accident flight, and the line with the triangular points is the curve computed by the Institute of Aviation Research (IAR), a division of the National Research Council (NRC) of Canada. Also shown on the graph is the position of the natural aerodynamic stall for a clean (uncontaminated) wing. [ . . .] There are significant differences between the expected and computed curves as follows: 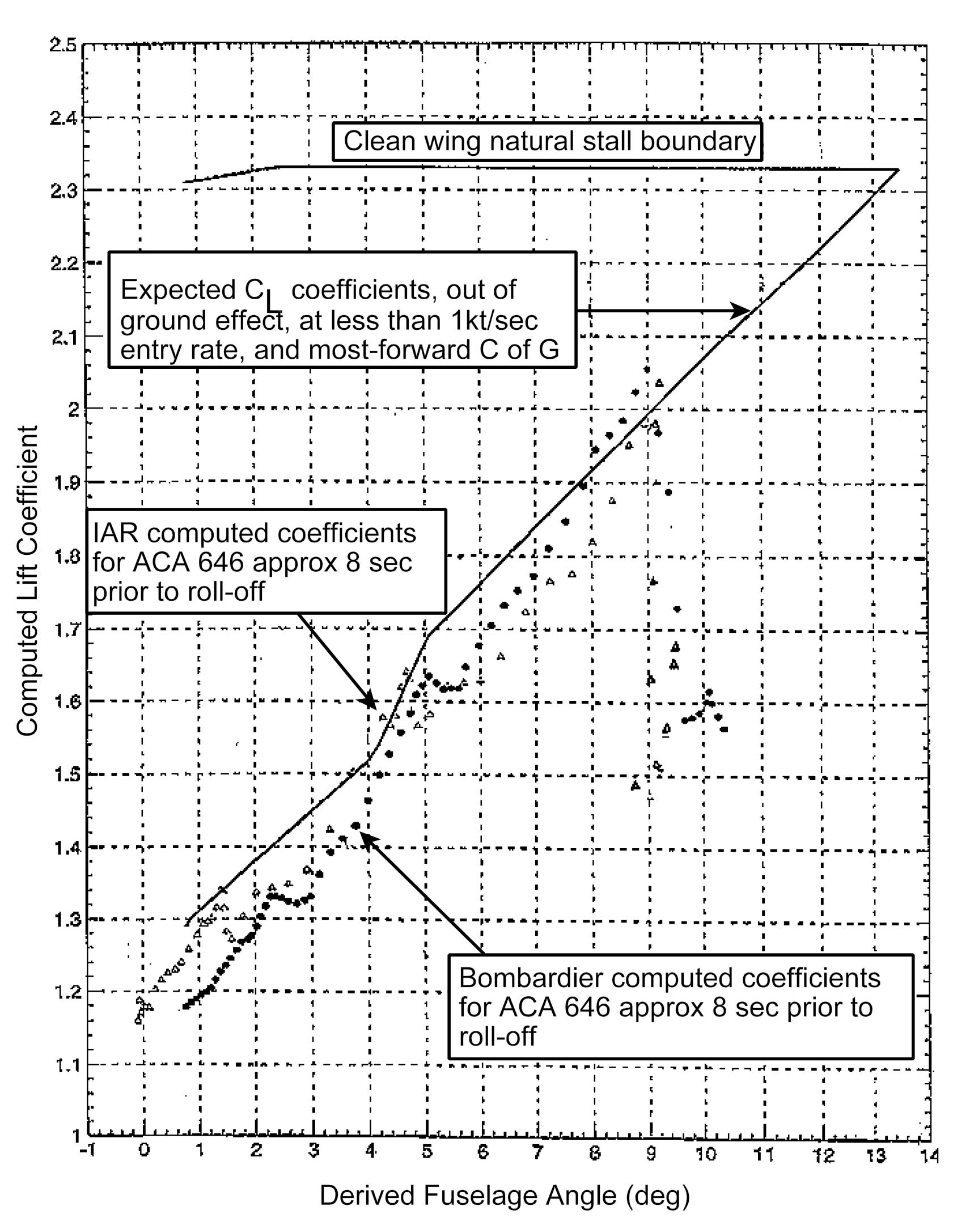 A review of literature regarding how ground effect alters aircraft stall characteristics was carried out. Although it is known that there is a definite reduction in stall AOA and CLmax due to ground effect, the review revealed that the available flight data were very limited and analysis techniques were not reliable. Notwithstanding these limitations, an attempt was made to quantify the impact of ground effect on the aircraft coefficient of lift and AOA for the accident flight, which indicated that the ground effect at the point of wing roll-off was likely to have caused a small lift increase (in the order of 2%) and a reduction in AOA of less than 0.3 degree for the same lift.