This crash would have been prevented had the crew properly flown the approach. They would have been aided in this effort had they computed a visual descent point. More about this: Visual Descent Point. An even better technique is available today: Continuous Descent Final Approach (CDFA). Though this mishap was in 2001, the aircraft and crew had all they needed to fly a CDFA back then.

They also noted they were just outside of 2 nm from the runway when they spotted the runway.

At 21:05:21 UTC flight CRX 3597 reported on the aerodrome control frequency. When the aircraft reached the minimum descent altitude (MDA) of 2390 ft QNH at 21:06:10, the commander mentioned to the copilot that he had certain visual ground contact and continued the descent.

At this point he was nearly 6 nm from the runway and 4 nm away from what would have been a normal descent point.

There is no mention of seeing the runway at this point.

At the same time, the copilot said quietly to himself: "Two four". The descent continued unchanged below the MDA. At 21:06:22 UTC the synthetic voice of the ground proximity warning system (GPWS) announced the radio altimeter reading 500 feet above ground. Immediately thereafter, the commander stated: "*****, zwee Meile hät er gseit, gseht er d'Pischte" – *****, two miles he said, he sees the runway.

When the captain spotted the runway he was 4.5 nm away and around 2,000 feet, just 600 feet above runway elevation and much less than that over the terrain.

At 21:06:31 UTC the commander mentioned that 2000 feet had been reached: "Two thousand". In addition, one second later the synthetic voice gave the "minimums" GPWS message, which was triggered by the radio altimeter reading at 300 feet. At 21:06:32 UTC aerodrome control ADC 1 gave flight CRX 3597 the landing clearance. During this radio conversation, the commander said quietly: "...go around mache?" – ...make a go around? At 21:06:34 UTC the commander instructed a go around and an acoustic signal indicated that the autopilot had been switched off. A few fractions of a second later, the copilot likewise expressed the intention to go around. The recordings of the digital flight data recorder prove that the crew pushed the power levers towards the take-off thrust position and the engines' RPM increased. One second later, the CVR began to record the sounds of an impact. A short time later, the CVR recording broke off. 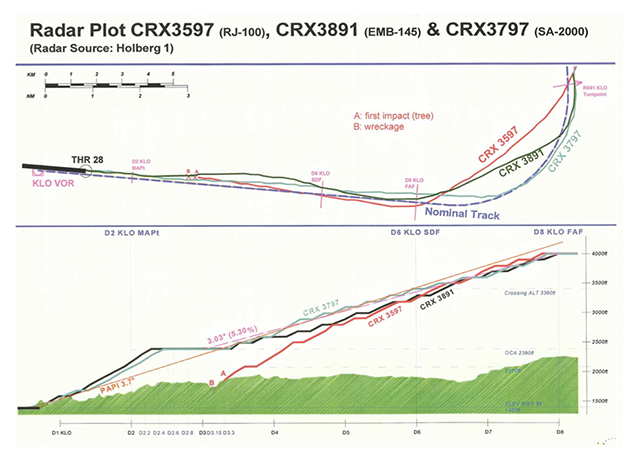 There are a lot of problems to consider:

But all of that could have been overcome had the captain simply stayed at the non-precision approach's MDA until a good visual descent point or when on the PAPI glide slope. The captain decided to begin his descent upon first sight of the ground; it does not appear that he saw the runway, which was obscured by a patchy layer of clouds. 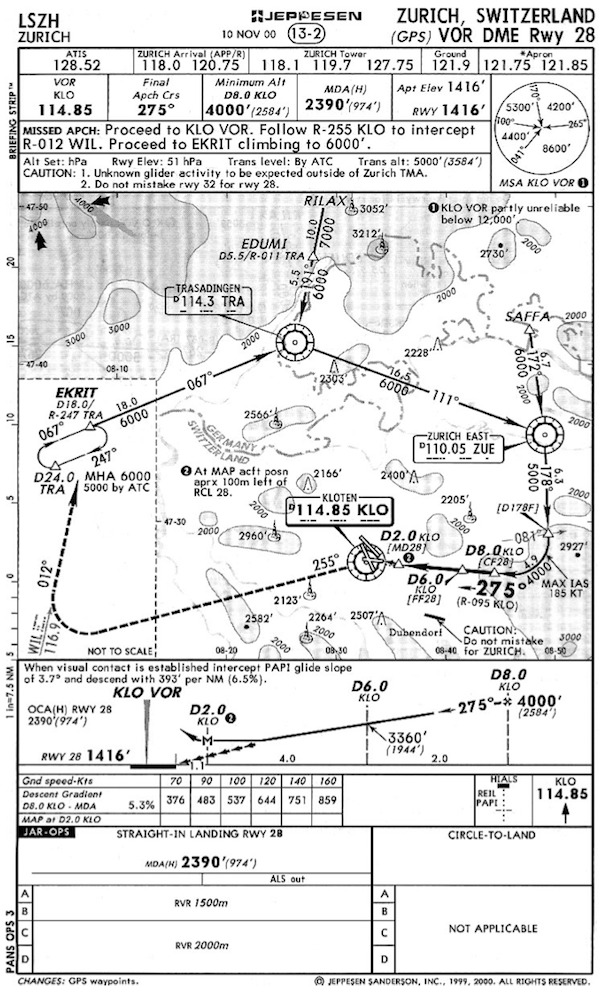 The intersection point of the PAPI glide path (3.7°) with the minimum descent altitude was at a slant distance of 3.3 NM from VOR/DME KLO, or 2.4 NM (4.4 km) ahead of the runway threshold. In order to be able to see the approach lights from this point, a computed minimum visibility of 3700 m would be necessary.

The reported visibility was 3500 meters, more than what they needed on the approach plate but not enough for what they needed doing the math. Had the crew stayed at the MDA it is unlikely they would have seen the runway at the last reported visibility of 3,500 m. But it was patchy and it is possible. In either case, go around or land, the mishap could have been avoided had the captain simply followed basic instrument flying procedure.

Swiss Confederation Final Report No. 1793 by the Aircraft Accident Investigation Bureau, Concerning the accident to the aircraft AVRO 146-RJ100, HB-IXM, Operated by Crossair under flight number CRX 3597, on 24 November 2001, near Bassersdorf/ZH.