When operating in cold and snowy environments, there are certain rules and regulations you should be familiar with, especially the fact that you probably are not entitled to use published holdover times in lieu of a pre-takeoff contamination check. Some manufacturers have stepped up and specifically said you can, I'll leave that determination up to you.

Unless you've got something that specifically says you can, be advised:

I recognize this flies counter to the way most corporate pilots operate, most of whom use hold over times as if they were approved. If anyone can point to any official guidance that authorizes them to use HOT tables without an approved program, please let me know. (Use the contact button on this page.)

Of course there is more to operating in the cold than deice/anti-ice, but most of that is aircraft-specific. The Gulfstream G450 has excellent cold weather operating procedures and many of its methods can be used by other aircraft as a model of how things should be done. More about these: G450 Cold Weather Operations.

It pays to think the de-ice/anti-ice process through before hand, there is a lot to get wrong in your rush to get off the ground right after the truck pulls away. Here is our checklist: Deice/Anti-ice Checklist. It works for us, perhaps you can tailor it for your aircraft.

The use of ethylene glycol as a deicing agent was started about 1956. At that time, it was used by the United States Air Force (USAF) in its cold weather operations, and a military specification was developed. After civilian operators started using the same formula about 1960, they found that the deicing/anti-icing needs for commercial use were substantially different from those of the USAF, which was using ethylene glycol and propylene glycol in a 3 to 1 ratio. Union Carbide's recommendation for commercial use of its deicer fluid for deicing follows: "Use a 50% dilution of UCAR ADF 11 (40% for milder ice conditions.) . . . For anti-icing Union Carbide recommends the following: UCAR ADF II is most efficient in its concentrated form for icing protection of ice-free aircraft."

The most notable failure of follow proper deice/anti-ice procedures was Air Florida 90, 13 January 1982. 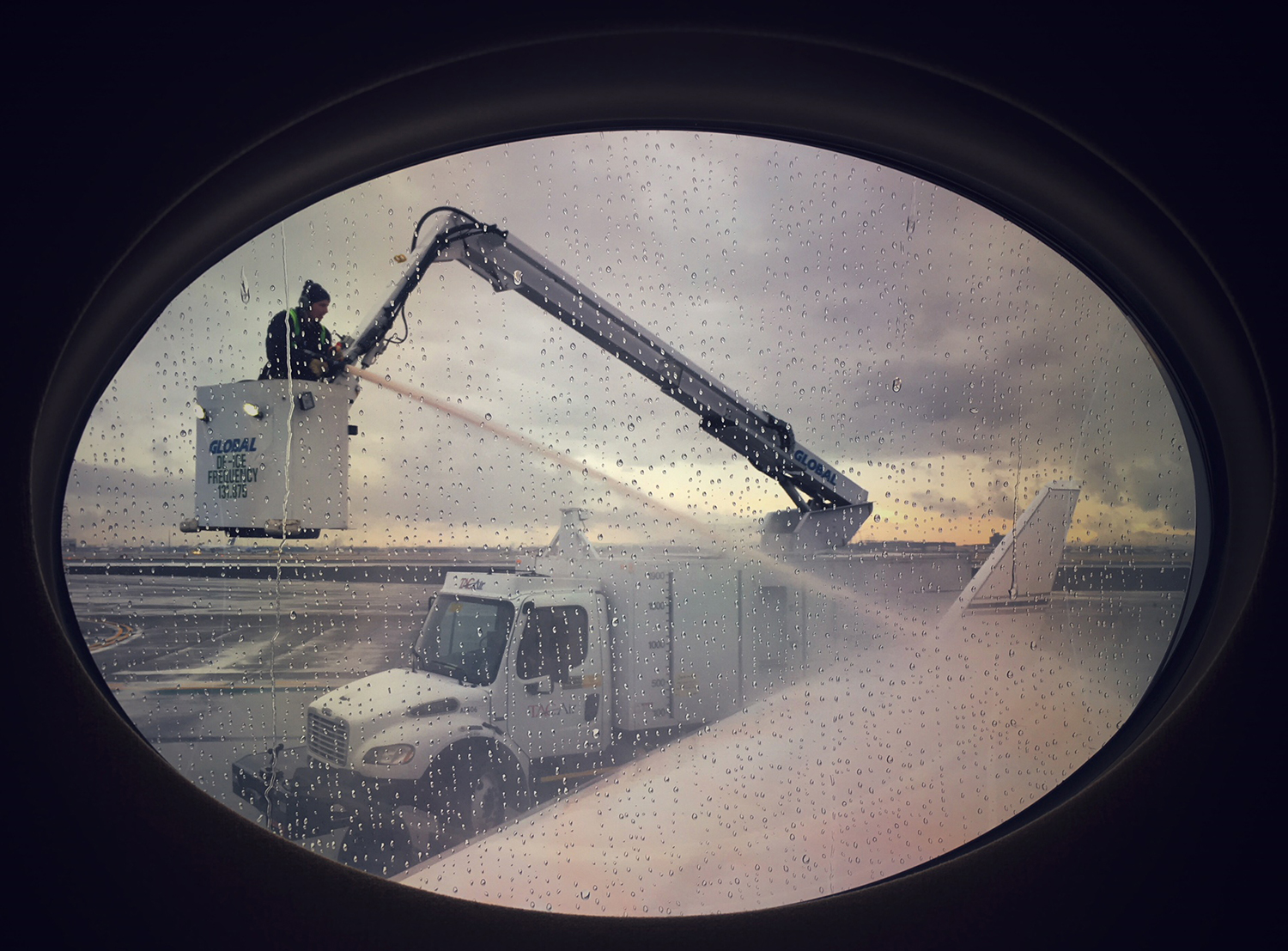 The CFR's remove all doubt about it, you have to remove the snow and ice before you go.

Regulations were established by the Civil Aeronautics Board (CAB) in 1950 prohibiting takeoff of aircraft when frost, snow, or ice is adhering to wings, propellers, or control surfaces of the aircraft. . . . The basis of these regulations, which are commonly referred to as the clean aircraft concept, is known degradation of aircraft performance and changes of aircraft flight characteristics when ice formations are present. These effects are wide ranging, unpredictable, and dependent upon individual aircraft design.

It is therefore imperative that takeoff not be attempted unless it has been ascertained, as required by regulation, that all critical components of the aircraft are free of adhering snow, frost, or other ice formations.

The only method currently known of positively ascertaining that an aircraft is clean prior to takeoff is by close inspection.

In conditions of freezing precipitation or high humidity when aircraft surface temperatures are near or below freezing and when it cannot be determined that snow or other ice crystal accumulations are not adhering and will blow off during initial stages of takeoff, surfaces should be anti-iced to retard the formation of ice prior to takeoff.

(a) No pilot may take off an airplane that has frost, ice, or snow adhering to any propeller, windshield, stabilizing or control surface; to a powerplant installation; or to an airspeed, altimeter, rate of climb, or flight attitude instrument system or wing, except that takeoffs may be made with frost under the wing in the area of the fuel tanks if authorized by the FAA.

(2) The airplane has ice protection provisions that meet section 34 of Special Federal Aviation Regulation No. 23; or

(3) The airplane meets transport category airplane type certification provisions, including the requirements for certification for flight in icing conditions.

(c) Except for an airplane that has ice protection provisions that meet the requirements in section 34 of Special Federal Aviation Regulation No. 23, or those for transport category airplane type certification, no pilot may fly an airplane into known or forecast severe icing conditions.

(d) If current weather reports and briefing information relied upon by the pilot in command indicate that the forecast icing conditions that would otherwise prohibit the flight will not be encountered during the flight because of changed weather conditions since the forecast, the restrictions in paragraphs (b) and (c) of this section based on forecast conditions do not apply.

I've flown the T-37B caked in ice and lived to tell the tale. (See No Time to Nap.) But that airplane had a straight wing with excess roll capability and as an Air Force pilot, I was considered expendable. If you've flown similarly ice-tolerant aircraft you could be tempted to forgo deicing in your newer jet, reasoning you've done it before. Twenty-plus years after my T-37 experience I was flying a CL-604 that is so sensitive to wing contamination, a paint run on one flap could cause the airplane to roll at slow speeds. A CL-604 was lost because the very thin coating on one wing made the airplane uncontrollable on takeoff. See CL-604 N90AG for more about this. A thin coating of ice may seem inconsequential but your margin between rotation speed and stall is awfully small. If one wing is stall right after liftoff and the other isn't, it is pretty much game over. 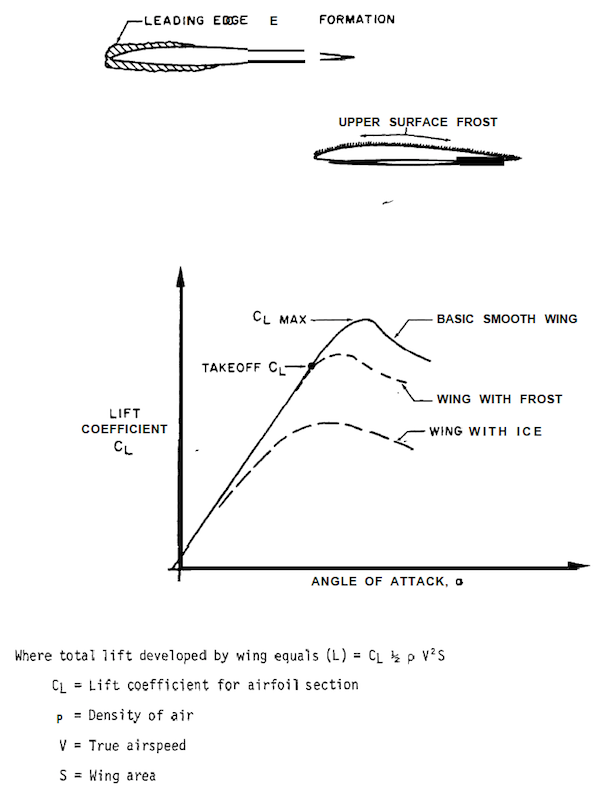 AC 120-60B ¶1. provides an industry-wide standard means for obtaining approval of a Ground Deicing /Anti-Icing Program in accordance with Title 14 of the Code of Federal Regulations (14 CFR) part 121, section 121.629.

No certificate holder may authorize an airplane to take off and no pilot may take off an airplane any time conditions are such that frost, ice, or snow may reasonably be expected to adhere to the airplane unless the pilot has completed all applicable training as required by §135.341 and unless one of the following requirements is met:

(2) The certificate holder has an approved alternative procedure and under that procedure the airplane is determined to be free of frost, ice, or snow.

(3) The certificate holder has an approved deicing/anti-icing program that complies with §121.629(c) of this chapter and the takeoff complies with that program.

In order to use Hold Over Times in lieu of Pretakeoff Checks, you must have an approved ground deicing / anti-icing program. AC 120-60B provides a means to do that. Note that 14 CFR 135 operations are covered, provided they have an approved program, their crews have been trained, and they are at a location where the ground crews have been trained under 14 CFR 121.629.

There are no provisions for 14 CFR 91 operations and 14 CFR 135 operators without an approved program or training are not qualified. Hold Over Times are still useful to you, but they do not relieve you of the responsibility of doing a Pretakeoff Contamination Check or the authority to delegate responsibility for that check.

During active ground icing conditions if the tactile and visual inspection is not completed within five minutes of takeoff, the pretakeoff contamination check required by § 125.221(b)(2) or § 135.227(b)(2) as per the air carrier’s approved procedures must be accomplished within five minutes prior to takeoff.

Under part 125 and part 135 (without an approved part 121, § 121.629(c) deicing/anti-icing program), the use of holdover times (HOT)/allowance times and tables when operators use deice/anti-ice fluids is advisory only and serves as guidance to the pilot in making takeoff decisions. Under an approved § 121.629 deicing/anti-icing program the HOT are limiting time values (instead of advisory) and the pretakeoff contamination check is only required if the holdover time has been exceeded prior to takeoff.

The HOT means two different things, depending on whether you have an approved program or not:

(a) Unless otherwise authorized in the certificate holder’s approved program, certificate holders who operate hard-wing (wings without movable leading edge lift devices) aircraft with aft, fuselage-mounted, turbine-powered engines should conduct pretakeoff contamination checks from outside the airplane. The pretakeoff contamination check for these aircraft should include a method, approved by the Administrator; to determine that all aircraft surfaces are free of contaminants.

(b) Operators of aircraft other than those addressed in paragraph (a) above, should conduct this check from outside the aircraft unless they can show that the check can be adequately accomplished from inside the aircraft, as specified in the certificate holder’s program. The program must detail procedures and requirements for this check. When developing a program for conducting the pretakeoff contamination check from inside the aircraft, certificate holders should consider if crewmembers are able to see enough of the wings, control surfaces, and other surfaces to determine whether or not they are free of contaminants. When making this determination, consider the aircraft type, the method of conducting the check (from the cockpit or cabin), and other factors, such as aircraft lighting and ambient conditions.

This is a bitter pill to swallow for many corporate operators for some reason. I've been doing the outside tactile checks for years and can report that most (if not all) passengers appreciate the effort.

It is safer: can you really detect anti-ice fluid failure on the ends of your wings from the cabin of the aircraft?

It also prevents embarrassment if you are doing a cabin check one day and your passengers spot me in the next airplane getting my hands dirty with glycol keeping my passengers safe. "Hey," they'll say, "why is that pilot over there checking his wings and why aren't you checking ours?" (I've got at least one report of this very thing happening.) 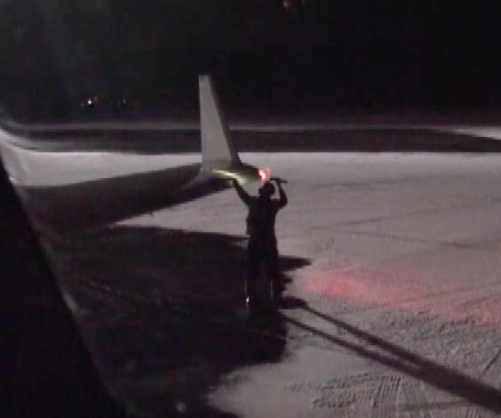 How not to de-ice

How not to De-ice, Part One

Just because the temperature is 0°C or even a bit warmer doesn't mean you are not at risk. If you have ice on the wings and pour hot water over it and the ice is gone, problem solved, right? I'm not so sure. But the folks at Ryanair are. Here's a video of the procedure: Ryanair Deice Procedure. The company defends the practice: International Airport Review: Ryanair in hot water over aircraft de-icing operations.

How not to De-ice, Part Two

The following was reported March 4, 2021 by Ben Schlappig and can be read directly here: Frontier Flight Narrowly Avoids "Catastrophic" Deicing Incident, One Mile at a Time tips, tricks, and travel with Lucky.

A few days ago I wrote about how a Frontier Airlines flight attendant’s quick thinking avoided what could have been a “catastrophic outcome” on a recent flight out of Nashville. We now have some more information, including statements from the airline and deicing company.

The always knowledgeable @xJonNYC has a note that was written from Frontier Airlines to the Air Line Pilots Association Safety Council outlining what happened:

Here’s the note that was allegedly sent regarding the incident:

Earlier this week during the massive snowstorm throughout the Central and Eastern States, we had a DEICE incident that could have led to a catastrophic outcome.

We (FFT) had an aircraft request and receive type 1 and type 4 deicing. The Vendor (Trego Dugan) stated to our flight deck crew that the aircraft was deiced and clear of contaminants.

Upon reaching the runway, and preparing for departure, an alarmed flight attendant called the flight deck stating that the wings were covered with snow and ice still. The flight crew visually inspected and retuned to the gate. Both wings had about a foot of snow and ice still covering the wings with some fluid sprayed throughout the wing area. We found out the vendor was running low on fluid. They have since been terminated from our operations.

We are letting everyone know, as a safety precaution, about our experience with Trego Dugan Deice in BNA.” 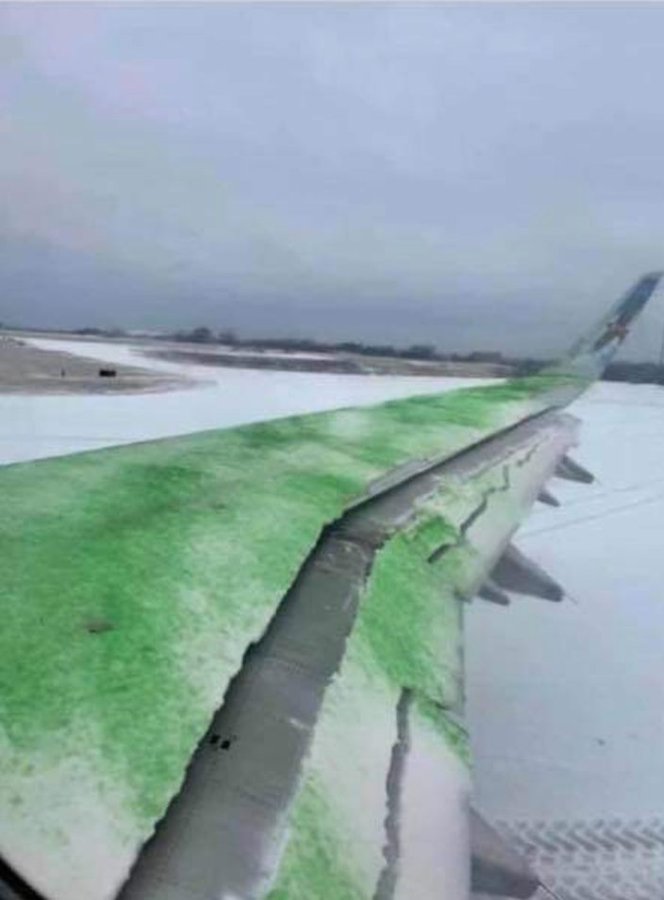 14 CFR 135, Title 14: Aeronautics and Space, Operating Requirements: Commuter and On Demand Operations and Rules Governing Persons on Board Such Aircraft, Federal Aviation Administration, Department of Transportation