VRA is one of those numbers that has to be established during certification but one the manufacturer is given so much latitude that it is pretty much meaningless once it is published. The published VRA in the G450, for example, is so much higher than VA, one would be foolish to use it in truly rough air.

That isn't to say it is a number you should ignore. Figuring what is behind the number is a useful exercise and coming up with an idea of what the number really should be can save your airplane's structure if you should happen to find some really rough air.

2 — The aerodynamics of gust loads 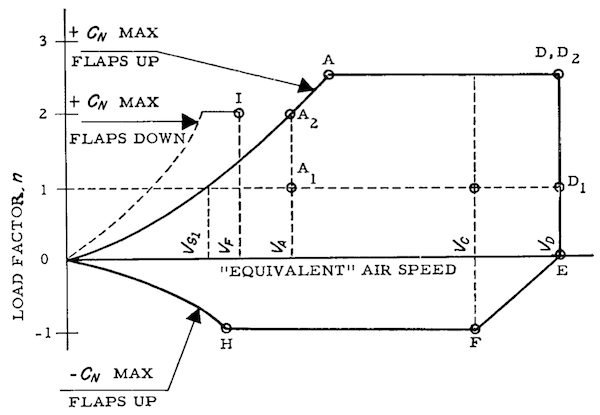 A rough air speed, VRA, for use as the recommended turbulence penetration airspeed in §25.1585(a)(8), must be established, which—

(1) Is not greater than the design airspeed for maximum gust intensity, selected for VB; and

(3) Is sufficiently less than VMO to ensure that likely speed variation during rough air encounters will not cause the overspeed warning to operate too frequently. In the absence of a rational investigation substantiating the use of other values, VRA must be less than VMO—35 knots (TAS).

Theoretically, VRA should be equal to the lesser of points A and H in the diagram and for most airplanes that would be Point H, since most aircraft are capable of more positive than negative load factor. (Load factor is called either n or g.) Aerodynamic theory, however, has to be tempered with other aircraft systems limitations, decreasing the available negative load factor to a point where point H becomes equal to aircraft stall speed. The derivation of VRA, therefore, becomes quite a bit more complicated.

(a) Information and instructions regarding the peculiarities of normal operations (including starting and warming the engines, taxiing, operation of wing flaps, landing gear, and the automatic pilot) must be furnished, together with recommended procedures for—

VS1 = the 1-g stalling speed based on CNAmax with the flaps retracted at the particular weight under consideration;

g = acceleration due to gravity (ft/sec2);

a = slope of the airplane normal force coefficient curve, CNA per radian;

(2) At altitudes where VC is limited by Mach number—

(i) VB may be chosen to provide an optimum margin between low and high speed buffet boundaries; and,

(ii) VB need not be greater than VC.

The requirement to furnish the pilot turbulence penetration speeds and procedures is gone but the design criteria still exists. If your aircraft manufacturer provides a VRA, or equivalent, it would be helpful to know what the number means. The manufacturer has some latitude with two boundaries:

That is a huge margin which leaves the pilot still wondering what is the correct speed for operating in rough air?

The aerodynamics of gust loads

Effect of Vertical Gust, from ATCM 51-3, Aerodynamics for Pilots, Figure 5.2. 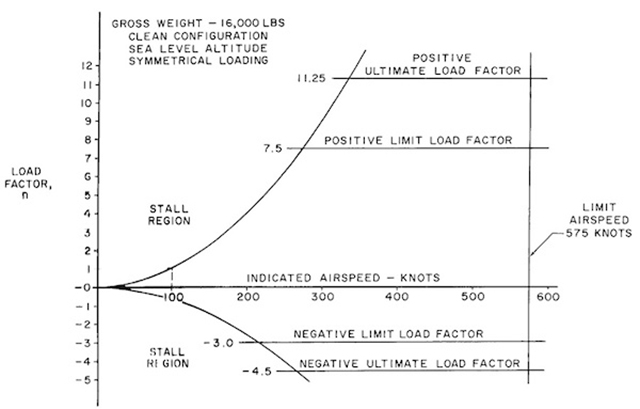 The operating flight strength limitations of an airplane are presented in the form of a V-n or V-g diagram. This chart usually is included in the aircraft flight handbook in the section dealing with operating limitations.

There is no V-g diagram in most transport category aircraft, of course. You can build your own, if you are so interested. If you fly your airplane with a degree of finesse you will never need a V-g diagram, to be sure. But it does help if you really want to understand the true VA of your aircraft and how to get the best performance from your wing.

The flight operating strength of an airplane is presented on a graph whose horizontal scale is airspeed (V) and vertical scale is load factor (n). The presentation of airplane strength is contingent on four factors being known: (1) the aircraft gross weight, (2) the configuration of the aircraft (clean, external stores, flaps and landing gear position, etc.), (3) symmetry of loading (since a rolling pullout at high speed can reduce structural limits to approximately two-thirds of the symmetrical load limits) and (4) the applicable altitude. A change in any one of these four factors can cause important changes in operating limits. 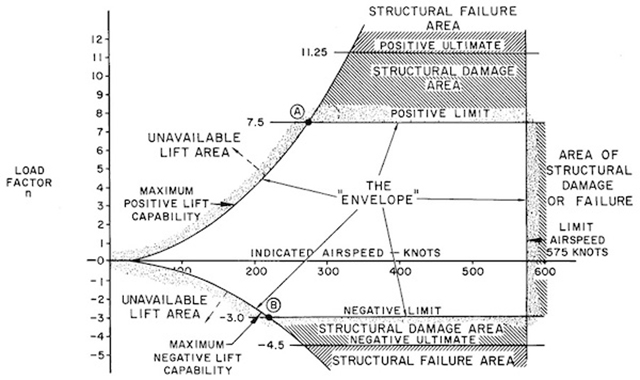 Significance of V-n diagram, from ATCM 51-3, Aerodynamics for Pilots, Figure 5.4. 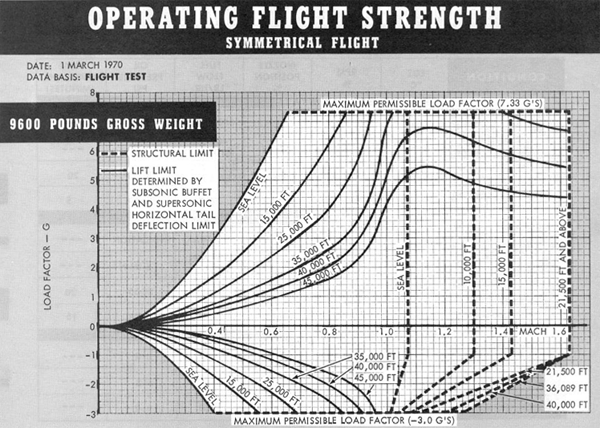 At 25,000' and a typical gross weight, the T-38 could best be maneuvered at 0.94 Mach. At this point the wing would not stall and the airplane could deliver 7.33 G. Conversely, if "going negative," the airplane was good for -3.0 G's up to 0.70 Mach. From this you could also conclude that if in rough air, the airplane should be flown no faster than 0.70 Mach because gust loads could be negative as well as positive. 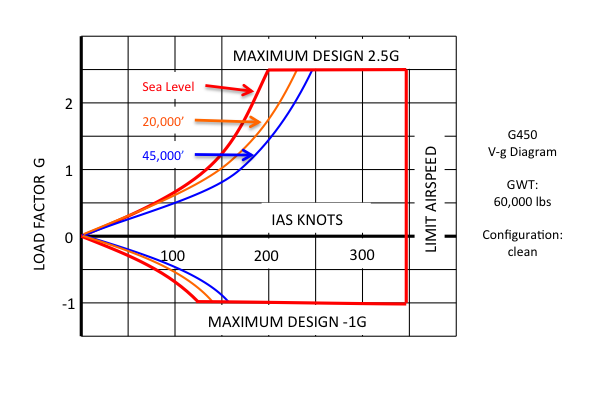 Gulfstream does not include V-g diagrams in their publications, but they can be derived using data available in the G450 Airplane Flight Manual.

See how to do this: Operating Flight Strength.

A typical transport category aircraft is unlikely to have a negative load factor limit greater than -1.0, in fact many specify a negative limit of 0.0 g. (The G450 permits -1.0 in the clean configuration but reduces that to 0.0 g with any flaps extended.) Given a limit of -1.0 g you have the paradox of a best operating speed equal to the aircraft's stall speed:

Flying the airplane at its stall speed in rough air, would satisfy 14 CFR 25, of course, but would hardly be advisable. Gulfstream, fortunately, offers a tighter range of speeds to fly in turbulence:

An aircraft with a 2.5 g positive load factor limit will have a VA of:

Since we always have a ready display of VREF it would be helpful to know what 1.5 x VS comes to in terms of VREF:

Best turbulence penetration speed for a G450 with 0° flaps is its VREF plus 15 percent.

Chances are your aircraft flight manual does not offer a V-g diagram but may give a VA maneuvering speed and a turbulence penetration speed. You should understand how these numbers were derived before blindly flying them. Chances are they are numbers built on a unique circumstance and could be hazardous to your health in other circumstances.

A good primer on why this is so: VA - Maneuvering Speed.

Please note: Gulfstream Aerospace Corporation has no affiliation or connection whatsoever with this website, and Gulfstream does not review, endorse, or approve any of the content included on the site. As a result, Gulfstream is not responsible or liable for your use of any materials or information obtained from this site.